SPIRIT IN THE WHIRLWIND

Whirlwinds are mentioned in several places in the bible

God speaks in a whirlwind

The cherubim were depicted above the mercy seat of the ark of the covenant.  These angels were always with the presence of the Lord. They travelled with the Lord in the whirlwind

They were fiery beings in a fiery whirlwind, spinning as an amber lighted wheel 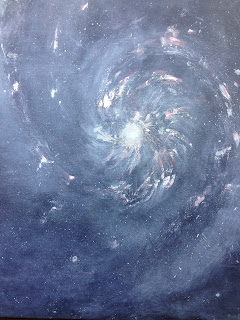 Ezekiel's vision of a whirlwind with Angels
Ezekiel 1 V4-5

The glory of the Lord came from the north.
The bright lights show some of the glory as it shines through the cloud.
The glowing in the centre is the cherubim approaching the throne of God

This painting is the expression I received from the Holy Spirit as I was reading the scripture above in Ezekiel.  The stars are the light bearers.
The whirlwind is divine transportation.
Life changing transition is ahead.

I hope you may be inspired by my latest painting. It is called the "Stairway to Heaven". It is a prophetic picture of Genesis 28 v10-22. It tells of how we can ascend into heavenly places with Jesus just as the angels. Developing our garden grants us access to God while on Earth.                Pam Finlay 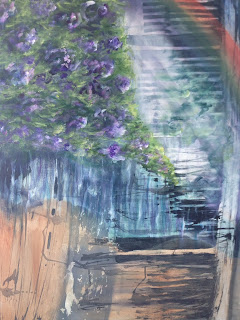 This painting that God gave me the vision for shows a prophetic illustration of how we can descend and ascend just as the angels and Jesus did(in his resurrection power) into the heavenly realms in the spirit.

The bottom of the painting symbolises how we can move from the desert place(Isaiah 35 V1-8) into a blossoming place in the Garden of God but God requires changes in us along the way.   Developing our garden grants us access to God while on Earth.   The key is by humbling ourselves (Prov 29 V23) and the renewal of our mind.  He longs for us to enter in, no more fences, no more lukewarmness, and ascend up that stairway into heavenly places to experience and fully live in His presence here on earth.  Moving through the gate, leaving our old sinful nature behind for good(Rev 21 V11-27).  When that happens, the veil will disappear , and both realms – the heavenly realm and earthly realm will open to you.
The rainbow symbolises Christ’s hope for us.

Windows are portals to your future

Windows are heavenly portals to our future and the opportunity to access the keys to open the windows resides in the actions of our heart.  A pure heart is what God desires from us. 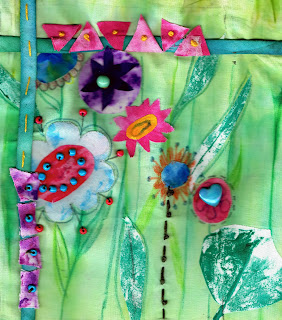