LOOK UP - THE LORD IS OUR BANNER 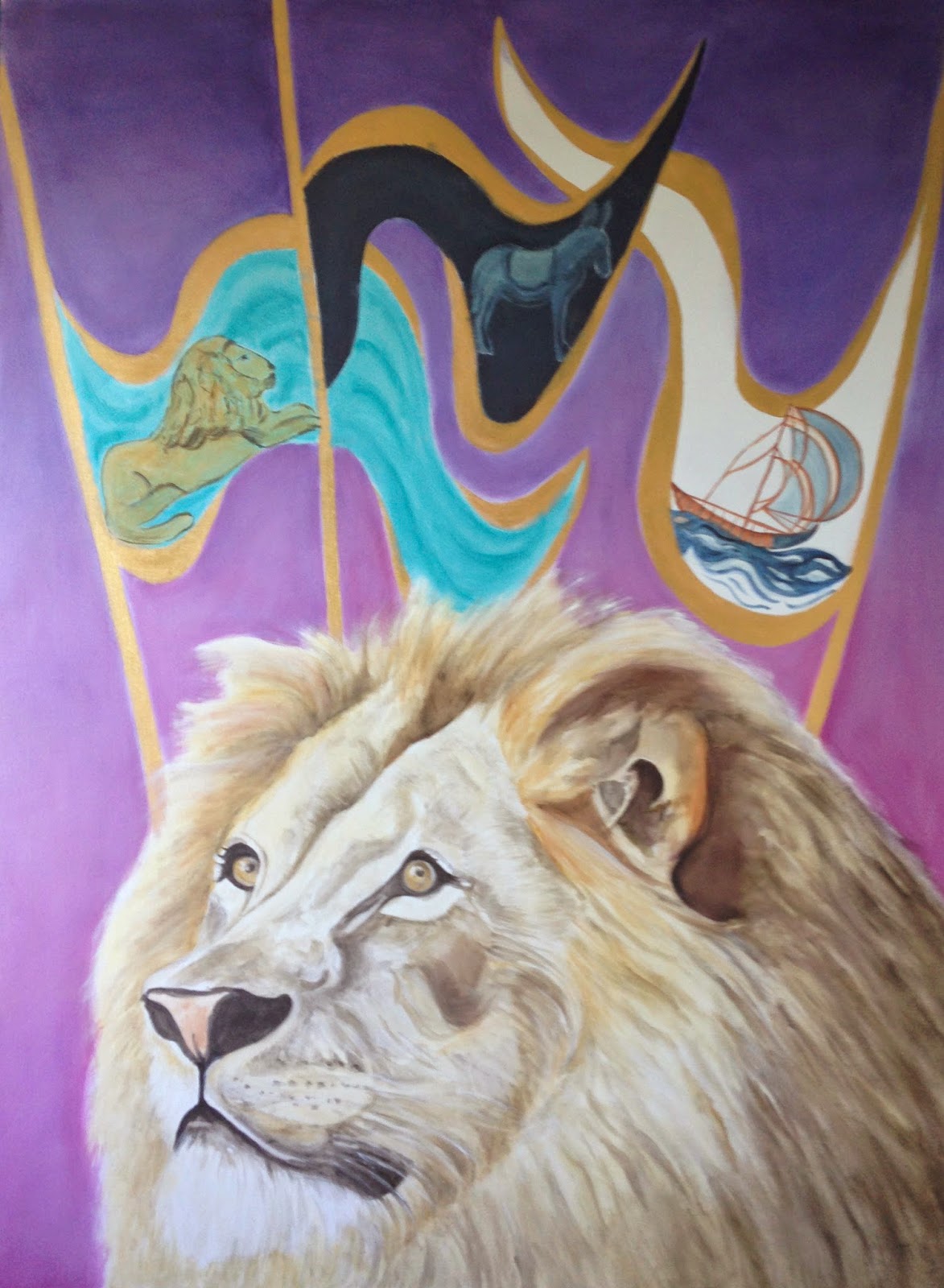 "Look up, The Lord is our Banner"
Pam Finlay
Acrylic on Canvas
August 2014
After church last Sunday the Holy Spirit gave me a picture of the Lion of the Tribe of Judah looking up.  I heard in my spirit the scripture:
Now when these things begin to happen, look up and lift up your heads, because your redemption draws near.  Luke 21V28.
Instead of looking out, look up, lift your heart to Him.
I was also led to draw three flags and was given the words, Victory, Triumph and Love in relation to the flags.
Scripture contains dozen of references to banners, standards and emblems but was told that the three flags represented three tribes:  Judah, Issachar and Zebulon.
The 12 tribes encamped around the tabernacle, with 3 tribes encamped on each of the 4 sides.  The tribes of Judah, Issachar and Zebulon were encamped together on the east side of the tabernacle.
There seems to be a significance toward the Eastern Gateway.
The tribe of Judah represents VICTORY.   The tribe of Issachar represents the times and seasons, in this season we have to keep the LOVE of Jesus as our main focus.  The tribe of Zebulon represents TRIUMPH.  The tribe stands for the government, a haven for leaderships.
God’s  governmental community is emerging, moving in His realm of authority, anointed with His Spirit and Life, filled with the Logos(the living Word of God).
The tabernacle pictures Jesus Christ and His ministry.  Tabernacled – which means to live in a tent, to dwell.   The purpose of the tabernacle was to be a dwelling place for God among men.
Exodus25 v8,9)  The term describing the dwelling or presence of God is the Hebrew word pronounced “Shekinah”.  The earthly tabernacle is a picture of the heavenly tabernacle (Hebrews 9v11)  The “new” Jerusalem will be surrounded by the nation of Israel with its tribes and the Gentile nations will occupy the rest of the earth, the church.
Revelation 21V3
The tabernacle of God is with men and he shall dwell with them and they shall be His peoples.
Numbers 1 v52
“The sons of Israel shall camp, each man by his own camp, and each man by his own standard, according to their armies”.
Numbers 2V3
“Now those who camp on the east side toward the sunrise shall be of the standard camp of Judah, by their armies”
Many references to “standards” refer specifically to the symbols of the 12 tribes.
Giving the entire honour of the victory to “Jehovah Nissi” – The Lord is our Banner
Exodus 17v15
And Moses built an altar, and called the name of it, The LORD is my banner.
A standard(flag, banner) makes a declaration before heaven and earth the persons heart toward the Lord, signalling his devotion to the Lord God Almighty.
Zechariah 9v16
As we lift up Jesus in the land, likewise he lifts us up as His standard among the peoples.
Numbers 10 v 14-28
Records the march of the children of Israel, as the Lord commanded according to their armies when they began their journey.  The people set out in groups organized by flags, as we read
“the standard of the camp of children of Judah set out first according to their armies and the other camps followed in like manner”.

The reason why I believe the Holy Spirit gave me the words Victory, Triump and Love was that after a supernatural victory, Moses likened God to a banner of triumph when he called an alter “Yahweh Nissi” – The Lord is my Banner.  His banner over us is love.

The prophet Isaiah spoke of the coming Messiah as a rallying flag and in that day there shall be a root of Jesse, who shall stand as a banner to the people ".
Isaiah 11V10
In that day the Root of Jesse will stand as a banner for the peoples; the nations will rally to him, and his resting place will be glorious.
Jesus is coming to his people as the Scepter of Righteousness.  An ingathering of his people coming together as one with His courage( Psalm 60 v4, Isaiah 11 v12).
Our God is a glorious banner of victory over us, a flag of triumph , and an emblem of love.
Song of Songs 2v4 mentions his banner of love.
“Let him lead me to the banquet hall, and let his banner over me be love”.
This type of banner is joyfully displayed for all to see – jubilant celebration.  The scripture in Psalm 20v5 also mention about rejoicing in what the Lord has done for us.
Psalm 20v5
We will sing for joy over your victory, and in the name of our God we will set up our banners.  May the Lord fulfil all your petitions.
Isaiah 62V10
Go through, go through the gates! Prepare the way for the people. Cast up, cast up the highway! Gather out the stones. Lift up a standard or ensign over and for the peoples
Jesus Christ, God’s perfect son, who saved His people from the reproach of sin and death to redeem us.  He gave us freedom so that we may share in His ultimate victory.    Let’s celebrate under that banner today.   The flags are to announce in the natural realm in accordance with what God is releasing in the Spiritual realm.  As we prophetically raise the flags we are proclaiming spiritual things that we cannot see with our natural eyes, waving that offering to the Lord, bringing heaven to earth, announcing God’s victory.
Blessings and Love,
Pam