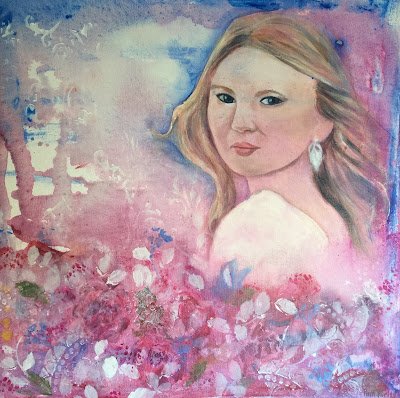 
This painting I was led to call "Innocence.  This bride is spotless and pure.  She is shining as a light in the world. The light of Christ illuminates her whole being.  This word means purity and the scripture that was speaking clearly in my heart was from Philippians 2:
15 so that no one can criticise you.  Live clean, innocent lives as children of God, shining like bright lights in a world full of crooked and perverse people(NLT)

Blessings
Pam
Posted by Pam Finlay at 03:12 No comments: 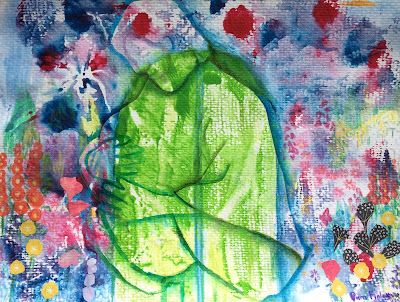 
The Sheep Gate, it is here our life in Christ begins.  Jesus tells us He is the Door of the Sheep.

John 10:7
Then Jesus said to them again "Most assuredly, I say to you, I am the door of the Sheep".

The Sheep gate was the first gate built in Nehemiah 3:
1 Then Eliashib the high priest rose up with his brethren the priests and built the Sheep Gate; they consecrated it and hung its doors. They built as far as the Tower of the Hundred, and consecrated it, then as far as the Tower of the Hananel
32 And between the upper room at the corner, as far as the Sheep Gate, the goldsmiths and the merchants made repairs. ‭‭NKJV‬‬
Upon research I discovered a few interesting details about the Sheep Gate.
Outside the Sheep gate, it is believed, was the location of the main animal market where sacrificed sheep were bought and sold in the second temple era.  The lambs and sheep were bought in through the gate after they had been cleansed in the upper pool of healing(the pool of Bethesda is said to have been near the entrance to the Sheep Gate).

The Sheep Gate speaks to me of all aspects of Jesus' life.  Jesus became our sacrificial lamb.  He was the sin  offering and His death, blood and resurrection have set us free.  He died so we could live.  He is the Door of the Sheep.  He is herding His sheep in.  Everything starts and ends at the Sheep Gate.  He is the Alpha and Omega, the beginning and the end.  Two hearts joined together as one, the love of Him whom lives in you.

John 17:
21 that they all may be one, as You, Father, are in Me, and I in You; that they also may be one in Us, that the world may believe that You sent Me.
26 And I have declared to them Your name, and will declare it, that the love with which You loved Me may be in them, and I in them.
‭‭NKJV

I hear Yeshua saying "press into me and I will press into you.  Treasures will be found".
Blessings
Pam
Posted by Pam Finlay at 21:06 2 comments: