THE ISLANDS OF THE SEA 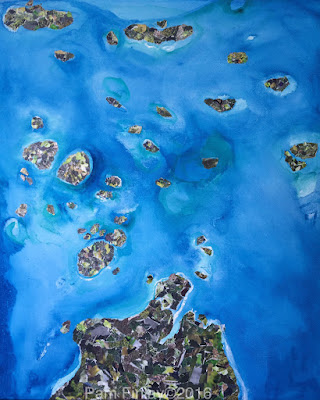 
In my spirit I hear “Islands” as I am painting this picture of an aerial view of the Torres Strait, situated in a stretch of water between Cape York Peninsula and Papua New Guinea, the most northern tip of Queensland, Australia.  The Lord has placed these islands on my heart since visiting Horn Island and Thursday Island in December 2015 for the “Creating an Atmosphere of Expectancy Faith Conference”. The ocean was painted first and then Holy Spirit prompted me to make the coastland from a collage of pieces, a mosaic of fragments unifying to make one whole.  He placed the first two scriptures below on my heart as I was painting and stirred up excitement in my spirit while I read and He revealed more and more scriptures as I meditated upon His word.


The word “Islands” is mentioned 35 instances in scripture.  Upon research I discovered that in scripture “Island” is used as a symbol of the gentile nations.  Isle or Island also means coastland.

Jesus is recovering all.  He is the restorer of all things.   His holy remnant are gathering, bringing forth a declaration of praise, are stirred up with His zeal, are being filled with the knowledge of the glory of the Lord, believing in the truth and power of His word.  By faith we obey.  Our faith in God makes us whole.  His word changes us.  Jesus Christ is the strength of our life, He is our hope.  In Him we can walk in newness of life.


Isaiah 11
9 They shall not hurt nor destroy in all My holy mountain, for the earth shall be full of the knowledge of the LORD as the waters cover the sea.
10 And in that day there shall be a Root of Jesse, who shall stand as a banner to the people; for the Gentiles shall seek Him, and His resting place shall be glorious.
11 It shall come to pass in that day that the Lord shall set His hand again the second time to recover the remnant of His people who are left, from Assyria and Egypt, from Pathros and Cush, from Elam and Shinar, from Hamath and the islands of the sea.
12 He will set up a banner for the nations, and will assemble the outcasts of Israel, and gather together the dispersed of Judah from the four corners of the earth.(NKJV)


Isaiah 42
10 Sing to the LORD a new song, and His praise from the ends of the earth, you who go down to the sea, and all that is in it.  You coastlands and you inhabitants of them!
11 Let the wilderness and its cities lift up their voice, the villages that Kedar inhabits, let the inhabitants of Sela sing, let them shout from the top of the mountains.
12 Let them give glory to the LORD, and declare His praise in the coastlands.
13 The LORD shall go forth like a mighty man; He shall stir up His zeal like a man of war.  He shall cry out, yes, shout aloud; He shall prevail against His enemies.


Isaiah 66
19 I will set a sign among them; and those among them who escape I will send to the nations: to Tarshish and Pul and Lud, who draw the bow, and Tubal and Javan, to the coastlands afar off who have not heard My fame nor seen My glory.  And they shall declare My glory among the Gentiles. (NKJV)


The scripture from Isaiah 61 is also speaking to my heart. His people filled with everlasting joy, possessing double, such a glorious promise from the Lord.


The greatness of our God.  Glory, glory, glory hallelujah to the King of Kings and Lord of Lords.  He rules and reigns and the whole earth will be filled with the knowledge of His glory.

Blessings and love,
Pam
Posted by Pam Finlay at 13:57 No comments: 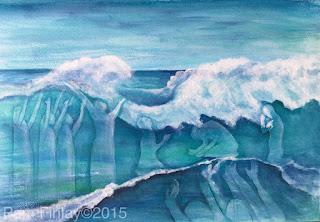 "On the Waves of Glory"
Pam Finlay
December 2015 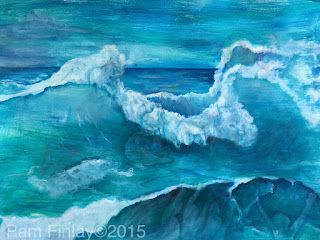 "Riding on the Waves of Glory"
Pam Finlay
December 2015
“ON THE WAVES OF GLORY”
It's not often that I am given a series of paintings that very similarly express a vision. With this series of paintings it is a case of the first will be last and the last will be first and I hear the scripture in Matthew 20:16 resonating in my heart.  There is a reward set before us.  This painting which was painted last I was led to call - "On the Waves of Glory".  Praise is expressing love and devotion to our Lord.  Waves of praise and worship, with hands lifted high and coming to Him on bended knee, God is moving through His people and filling the earth with His glory.
Habakkuk 2:14F
For the earth will be filled with the knowledge of the glory of the Lord, as the waters cover the sea (NKJV)
Psalm 72:19
And blessed be His glorious name forever!  And let the whole earth be filled with His glory.  Amen and amen (NKJV)
Holy Spirit is coming in wave after wave, wash and drink in the glory of His presence.  Be carried on the current of His waves.  Be filled with the beauty of His Spirit, He is washing us clean as we lift our praises to Him.  God inhabits the praises of His people. Praise lifts us into God's presence and power, He dwells in the atmosphere.  Praise is the opening to enter into His glory.
Psalm 22:3
Yet, I know that you are most holy; it's indisputable.  You are God-Enthroned, surrounded with songs, living among the shouts of praise of your princely people (TPL)
Psalm 100:4
Enter into His gates with thanksgiving, and into His courts with praise (NKJV)
Psalm 66:2
Sing praise about the glory of His name. Make His praise glorious (ISV)
Praise, praise, praise the King of Kings and Lord of Lords!!!
“RIDING ON THE WAVES OF GLORY”
God is flooding the earth with wave after wave of His glory.   He wants us to be one with the waves, lifting our never ending praises to Him, being transparent like the crystal clear waters.
This was the first in a series of paintings that the Lord gave me to paint in early December 2015.  After I finished painting I noticed that the wave resembled huge angel wings.  We are covered under the shadow of his wings
I could see His waves of glory coming over the nations and the face of the Lion of the Tribe of Judah appeared in the wave as if He was watching the tidal wave coming in to shore, transforming lives, washing people clean. The three white horses also appeared in the wave and immediately I thought of the Godhead Three in One, and the white horse being symbolic of power and purity in the Word of God.  Praise is the key to intimacy with the Father.   I could see the outlines in the foreground of people lifting their hands in praise and also coming to Him on bended knee, postured in humility, basking in the Lords’ presence, filled with His light, carrying His glory to the nations, living His word.   Jesus Christ, the word made flesh endures forever.
Scriptures received for this painting were Psalm 91:4, John 1:14, Isaiah 60:1-2, 2 Corinthians 3:18.
As I was preparing to share this painting at our local church congregation on the 10/1/16 Holy Spirit gave me two more scriptures pertaining to the painting being Isaiah 66:12, Habakkuk 2:14.
Love and Blessings,
Pam 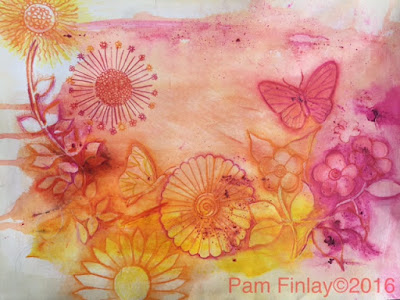 Only in God’s garden can we find peace.  Living in His rest there refreshes our thirsty souls.  The door to His sacred garden is open, access is through obedience and faithfulness.

In the beginning God desired for man to dwell in the Garden of Eden.  He placed man there to tend and watch over His garden.
Genesis 2:15
The LORD God took the man and put him in the Garden of Eden to work it and keep it (ESV)
There are different times and seasons in God’s garden.  His garden dwells in our hearts, His Holy Spirit lives on the inside.   Sometimes it is a time to plant, sometimes a time to water.
Ecclesiastes 3:1
To everything there is a season, and a time to every purpose under the heaven(KJV)
Sometimes it is a time to cease from works and enjoy the rest.
Hebrews 4:10
For he that is entered into his rest, he also has ceased from his own works, as God did from his (NKJV)
God has designed every person with a unique gifting to carry out His plan on earth.  We all need one another to successfully fulfil His purposes for mankind.  When we are faithful in following Him he causes us to flourish and grow.  Sometimes He prunes us when we need to let go of things that are holding us back.  Holy Spirit will encourage your soul to find rest.  He prepares people to receive His word, offering His living water to restore your soul.   He sows the word in our hearts.  He cultivates His people to prepare them for a fruitful harvest.

The gateway to this golden garden points to perfect rest.  Walking through the garden and smelling the fragrant aroma, this is the perfect pathway to wholeness.  A place of sunshine, the light of Christ shining brightly within, that’s the way to fruitfulness, the heart stepping into the eternal, laying our burdens at Jesus’ feet and living a glorious life, that's paradise.

A PLATE FIT FOR THE KING - HEAVENLY MANNA 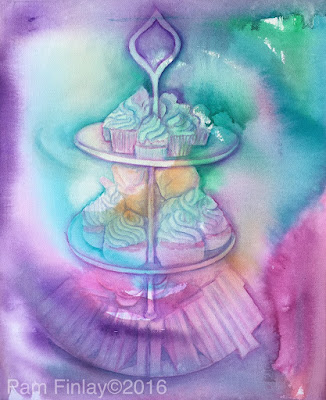 "A Plate Fit For The King - Heavenly Manna"
Acrylic on Canvas
Jesus is extending an invitation to come dine with Him at the Banquet table.  There is awesome food, 3 Tiers, levels, realms of understanding, body, soul, spirit.  The third tier heavenly, being pure sweetness.  Come and feast at the Banquet table, being willing and obedient to the Lord.  Come eat of His heavenly delights.  His word is awesome food for your soul and spirit, eternal food to nourish you forever.  You will never go hungry.
Psalm 63:5
My soul shall be satisfied as with marrow and fatness, And my mouth shall praise you with joyful lips
Psalm 107:9
For He satisfies the longing soul, and fills the hungry soul with goodness
Like the scripture tells us in Joel 2:26
You shall eat in plenty and be satisfied, and praise the name of the Lord your God, who has dealt wondrously with you; and My people shall never be put to shame
Rev 3:20
Behold I stand at the door and knock.  If anyone hears my voice and opens the door, I will come in to him and dine with him, and he with me.
Other scriptures I have been led to are:
Luke 14:15-24, Is 25:6, Ps 23, Is 1:19, Is 55: 1-2, Joel 2:24-26, Rev 7:16-17, Matt 22:1-14.
Banquet is mentioned 72 times in the bible ( I am sure through seeking these scriptures God will reveal much more).
The table is set. There is an invitation by Christ to attend His banquet supper.  I am ready to come dine with you Lord with all joy.
Love and blessings,
Pam
1 January 2016