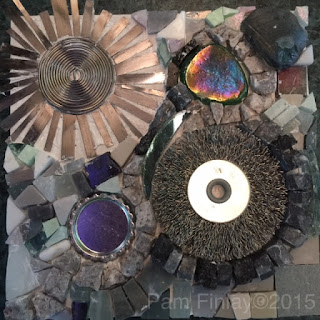 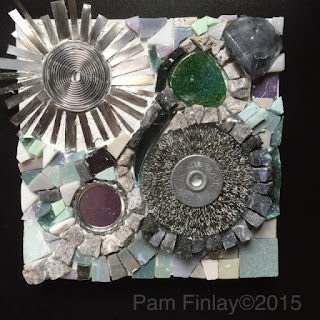 The Wheels
Pam Finlay
Mixed Media Mosaic
August 2015
After finishing this mosaic Holy Spirit revealed to me scriptures that pertained to the creation of this mosaic. I knew there must be a reason why I had placed 30 spokes on the wheel in the top left hand corner.  On research I discovered there are 30 occurrences of the word "wheels" in scripture.  The number 30 speaks of consecration and maturity in scripture. Some scriptures that speak of this are Numbers 4:3 and Genesis 41:46.  Jesus began his ministry at the age of 30 as it tells us in Luke 3:23, the age of maturity.
Reverberating from within the wheels, is the voice of the Lord of Hosts.  The spokes radiate out from the centre hub.  Jesus is at the centre. Wheels set things in motion, they set a course, going forward in understanding of God's truth, His word being placed deep within our hearts, walking in His divine love.
I have attached two photos of the mosaic as I was intrigued that the stone in the top right hand corner of the mosaic appeared to change colour when I took two separate images. When I looked at the top photo it reminded me of burning coals.  The burning coals of fire is His love.
The silver wheels.  Silver speaks of redemption.
Jesus has redeemed us by His blood.  He is refining and purifying us as scripture tells us in Malachi 3:3
He will sit as a refiner and a purifier of silver; He will purify the sons of Levi And purge them as gold and silver, That they may offer to the Lord An offering in righteousness (NKJV)
We are to be refined as silver and all the dross will be burned away.  His fire is burning out all that is not of Him.
Daniel 7:9
I watched till thrones were put in place.  And the Ancient of Days was seated; His garment was white as snow, and the hair of His head was like pure wool.  His throne was a fiery flame, its wheel's a burning fire (NKJV).
A number of scriptures in Ezekiel make mention of the wheels with regard to the four living creatures.    The wheels go wherever Holy Spirit leads them.  They have the DNA of Jesus Christ, having the synergy of heaven.
Blessings and love
Pam

A LIGHT IN A DARK PLACE 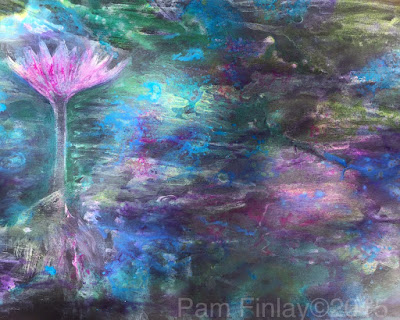 "A Light in a Dark Place"
Pam Finlay
August 2015
Acrylic on Paper
For some reason this morning I was led to paint a black background instead of working on the usual white canvas.  As I was laying and spraying colours onto the background I knew that this painting was to be called "A Light in a Dark Place".  Immediately I thought of the scripture in 2 Peter 1:19
And so we have the prophetic word confirmed, which you do well to heed as a light that shines in a dark place, until the day dawns and the morning star rises in your hearts(NKJV)

The prophetic word shines light.  Jesus, the day star is arising in the hearts of His people.  God is causing us to bud and blossom like the lily.  I hear him saying "lift up your heads like the blossom reaches toward the sun".  His light shines like a lamp in a dark place and he is infilling us with His marvellous light.  Jesus is arising in our hearts and we can rejoice.   These two following scriptures speaks to me about the restoration of His people with fruitfulness.
Hosea 14:5
I will be like the dew to Israel;
He shall grow like the lily,
And lengthen his roots like Lebanon
Malachi 4:2.
But to you who fear My name
The Sun of Righteousness shall arise
With healing in His wings;
And you shall go out
And grow fat like stall-fed calves(NKJV)

Jesus the "Sun of Righteousness" is restoring His people and He is revealing His glory.  The Lily's beauty and aroma exemplifies Christ.  He is that sweet smelling aroma and he desires for us to become the fragrance.
By the way when I photographed the painting this morning I was amazed that the sunlight shined upon it for a split second and it was illuminated.  It became brighter than it actually is for a moment and I knew God was showing me a special sign.
Love and blessings
Pam
﻿
Posted by Pam Finlay at 04:57 No comments: