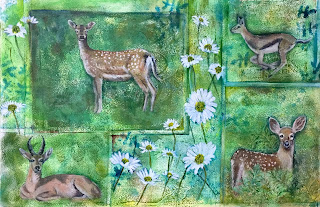 Swift As Gazelles
Pam Finlay
Acrylic on Paper
May 2019

Alertness and swiftness from the Lord alone.  He sets my feet on places of elevation.  His heavenly Kingdom, being established on earth as it is in Heaven.
I  Chronicles 12:8
Some Gadites joined David at the stronghold in the wilderness, mighty men of Valor, men trained for battle, who could handle the shield and spear, whose faces were like the faces of lions and were as swift as gazelles on the mountains.
Psalm 18:33
Who makes my feet swift as the deer; who makes me stand on high places ISV
Psalm 18:33


Through you I ascend to the highest peaks of your glory to stand in the heavenly places, strong and secure in you.  TPT